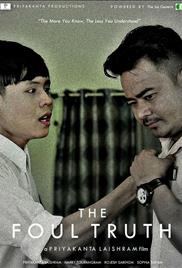 Be the first one to add plot for this title.

THE FOUL TRUTH (Amakpa Achumba) is a multiple international award winning Manipuri short film that deals with the sensitive and serious issue of Male Rape/Male Sexual assault/Child abuse.The Foul Truth written, edited and directed by Priyakanta Laishram is the first Indian film to highlight the real scenario of male sexual assault survivors. The film speaks on the evil truth of the society. The film charts the story of a young teenager - Thoithoiba (played by Priyakanta Laishram), who is a survivor of male sexual assault. The story revolves around the social stigma and discrimination attached to male sexual abuse. The film received rave reviews from all corners for its subject, performances and narrative. The film won multiple Best Actor In A Leading Role awards for Priyakanta's role and other awards such as Best Film On Other Social Issues, Best Screenplay, Unconventional Film Award, Best Sound Design, Best Motion Picture Drama at various national and international film festivals. Priyakanta Laishram said - "The Foul Truth is a challenge and mission for me as an actor, a director and as a human being. I am carrying a very big responsibility with this. Being accepted by people or not, this story is a fact! Men and boys are raped everyday. Male sexual abuse has profound effects on those who experience it and can deeply affect their mental health and relationships. Anyone regardless of gender, race, age, sexual orientation or physical strength can be raped anywhere, anytime. Men are raped by both men and women. It is difficult for a male victim, heterosexual or homosexual, to report the sexual assault that was experienced by him, especially in a society with a strong masculine custom. They are afraid that people will doubt their sexual orientation and label them as gay, or that they may be seen as un-masculine because they were a victim. Even media channels and filmmakers don't want to cover this issue because they think it is something abhorrent. This is the reason why I am doing this film. It is high time for each and everyone of us to wake up. This topic needs to be discussed." The film also stars Rojesh Saikhomba, debutant child actor Harry Tourangbam and Sophia Sapam.

Edit Synopsis | Back to title